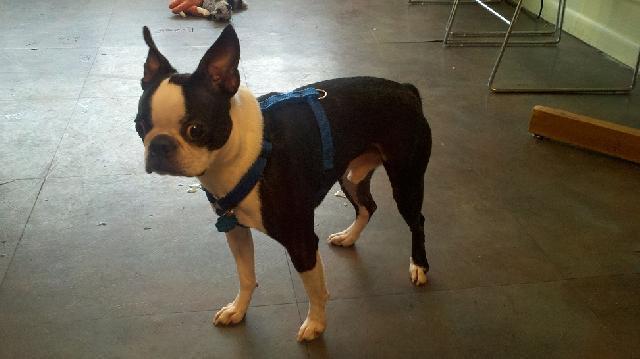 Duncan is a precious little boy who joined our rescue because his family felt he'd be happier with a family that had more time for him.

Duncan is a very sweet boy. He is friendly towards everyone and loves attention and snuggle time. Duncan was a bit nervous when he joined his foster home. He was very anxious about the other dogs, but as the days have gone by, he's started to trust the other dogs more and more. Duncan is partial to the other boston terrier in his foster home and likes to lay beside her. He's started to play a little bit with her as well. He is mostly housebroken, and even though his surroundings have changed, he has done very well. He goes outside regularly with the other dogs and does his duty quickly. He doesn't care for the cold so he will run back in the house as soon as he's done. He is a very agile dog and for that reason, we closely monitor him when he is outside. Though he has not tried, we think he could very easily jump the gate to get out of the fenced in yard. His new family must be sure to supervise him in the yard or take him for leash walks.

Duncan is a typical, joyful, jumping boston terrier. He is quite active and would love to have a securely fenced in yard or go for a jog with his human. He is good with most other dogs. We will require that he meets the resident dog before joining a home with another dog. A home with another boston terrier would be ideal. He's partial to the other 'American Gentlemen'--- or ladies for that matter. He would not do well in a multiple dog household, but one other is okay. Duncan shows no food aggression and doesn't mind being pet while eating. He is easily excited when being given a treat so he needs to be reminded to take it gently. Duncan has lived with young children previously and did okay. We feel that Duncan would really thrive in a home where he gets a lot of attention, so we think a home with older children 13+ would be best for him.

He does have some anxiety that needs to be worked with. He is nervous in new situations, so we expect him to need a few days to transition into his new home. We've started using a thundershirt to help him relax during times of stress. He is not destructive when stressed, but he will shake when his nerves get the best of him. He is also obsessed about licking his people's face. We think he finds this comforting, but it's not the best habit. We don't allow him to go overboard with this habit and in place of licking his foster mom's makeup off, he's given an interactive toy like a kong filled with treats or peanut butter while wearing his thundershirt.

He really is a fantastic boy who is very loving and would love to have a home where he  gets lots of attention and proper exercise. If you're interested in adopting Duncan, please fill out an adoption application.